Surface Preparation is a very common application in abrasive blasting. One step ahead of the Blast Cleaning process, Surface Preparation involves the creation of spikes on the surface of an object to help coating adhesion – so-called anchoring profile.

Painting and coating works will not bond correctly unless a proper surface preparation is applied. This technique is used in a broad range of manufacturing and restoring applications.

Sometimes, one can clean and prepare a surface in only one sandblast passage. Rust and contaminants are easy to remove from surfaces when a media is meant to create a surface preparation rather than simply clean.

What is Surface Preparation?

Surface preparation is the very first stage treatment of a metal (or other) surface before the application of any coating. It involves cleaning the surface of any contaminants such as oil, grease, loose rust, and other mill scale, then the creation of a suitable profile on which painting or other functional coating will bond.

It is critical in any coating application to ensure a long-lasting adherence of protective coatings – whether through a spraying application, hot dip, etc – and to prevent corrosion. 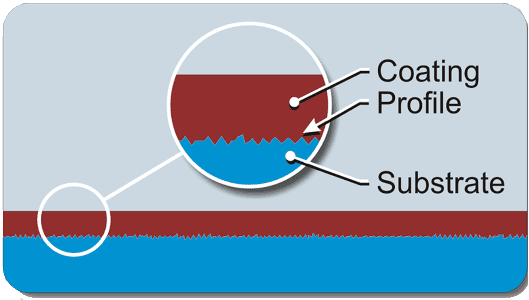 Abrasive blasting is a very efficient and economical process, and possibly the best surface preparation technology. It consists of propelling an abrasive media onto a metallic surface using a high pressure blasting system in order to create a roughness profile to help with the adherence of paint or another functional coating.

Without proper surface preparation, a coating might chip or flake when exposed to harsh conditions (cold, heat, rubbing, or friction) and fail. Abrasive blasting may not be the only process used to obtain the proper surface cleanliness. In some cases, an additional surface cleaning with solvent or other chemical product may be required.

Typically, there are three stages where a metal surface or steelwork need surface preparation prior to the application of coating:

Surface treatment for newly manufactured products usually occurs in a very controlled environment – whether in manual or automated sandblast cabinets or an abrasive blast room. Also, various parts and components of large structures can be treated individually before assembly on worksite. At this specific stage, surface preparation and coating process are critical to ensuring a long-lasting life for products or steelwork.

Maintenance jobs on existing metal surfaces can be a lot more complicated – especially on large already-assembled structures like ships, bridges, and civil engineering structures. For these applications, a portable blaster is usually brought on-site and operators must deal with uncontrolled weather conditions.

As mentioned before, exposing metal surfaces to moisture while they are still uncoated can lead to corrosion very quickly. Therefore, project planning according to weather can become a very challenging task. Fortunately, some coating specifications do not require a fully exposed metal surface in order to ensure a proper bonding of subsequent coating. Sometimes, removing the first layer of coating can be sufficient to ensure proper bonding.

Sandblasting is a technique that combines efficiency, performance and accuracy. For these reasons, it is widely used in a variety of applications, from the simplest to the most complex.

Painting and coating manufacturers usually specify the minimum requirements for their coating products to adhere properly.

In surface preparation, the same standards used in Blast Cleaning apply, as for the cleanliness level of the workpiece. However, the requirement goes farther with the addition of the anchor pattern – the surface roughness level to achieve. The anchor pattern is basically the peaks and valleys of a given surface viewed on a microscopic scale.

The profile is expressed in millimeters, microns, or mils and is measured by the depth of the valleys from the average surface. It is extremely important to meet the requirements presented in the job’s coating specifications, as unperfected surfaces may lead to premature paint failure. On the other hand, an anchor profile that is too aggressive will increase production costs by requiring more coating product and more time to coat.

How do we Assess if the Metal Surface Preparation Meets requirements?

As mentioned in the Blast Cleaning application, a chloride test and/or a magnifying glass are used to assess whether or not the surface meets the cleaning standards set by the Society for Protective Coatings (SSPC) and NACE International Standard.

Additionally, the anchoring profile and “roughness” level of a given surface can be controlled for optimal bonding of coatings. There are several methods used to measure or assess the distance between the peaks and troughs of a blast-cleaned surface. The most common methods are comparator panels, dial gages, and replica tapes.

The dial gage uses a calibrated needle gage to measure the depth of the pikes of a given area on a surface by taking a set of measurements (so-called sample) on different areas of the workpiece. The average of the different measurements of the sample corresponds to the value of the anchoring profile. The number of measurements required for the sample relies on the coating manufacturer’s specifications for a given application.

The replica tape involves the use of a two-layer plastic film – one compressible layer and one 50 µm thick incompressible foam layer. The compressible layer is placed on the blasted steel surface and then rubbed with a circular-ended tool until the surface has conformed to that of the steel. The tape is then removed and measured with a dial gage.

Surface preparation for thick or high-build coatings, or thermally sprayed metal coatings, is usually performed with angular abrasive media that can easily penetrate the surface and create pikes. Thin film paint coating, on the other hand, requires a shot blasted surface with less aggressive amplitude pikes – this is usually achieved by using spherical abrasive media.

Here are the most common forms of media used for surface preparation:

*JetMag and Coal Slag are low-recyclability media. However, they are relatively cheap and perform well. They are usually used for outdoor applications or when abrasive media is not recovered due to cross contamination.

Refer to the IST Media Selection Guide in order to choose the right media for your application.