ISTblast offers a wide range of Pressure Blast Pots for new and existing blast booth installations. Available with tank capacities ranging from 3.5 cu. ft. to 10 cu. ft., they can accommodate one or two operators at the same time.

In most installations, we are able to fit a storage hopper between the media separator and the blast pot to provide long hours of blasting autonomy. Blasting facilities can be designed to allow up to four (4) operators to blast simultaneously. 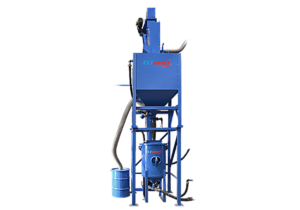 In the field, most pressure blasters are Pressure Hold System to increase the blaster’s productivity by maintaining the pressure inside the blast pot when the Deadman control is released. Otherwise, each time the remote control is released and re-engaged, it would take the system 10-15 seconds to build back its pressure for producing an effective blast media stream. This results in downtimes, loss of productivity, and inefficient compressed air consumption.

On the other hand, the blast pot has a certain blasting autonomy and must release its pressure in order to let the plunger fall down and refill the tank with abrasive media. In the Pressure Release System, that occurs every time the Deadman control is released. But really how frequent do you need to refill the pot during a job?

So which system is better for a sandblast room?

The answer is BOTH! The Double Control System has all the advantages of both systems. It maintains the pressure when the Deadman control is released to facilitate frequent start/stop operations, but allows the operator to release the pressure and refill the pot from a switch located inside the sandblasting booth, without the need to remove safety equipment and reach the depressurization valve manually on the blasting machine.

For more information on the different configurations of a blast pot, visit: How to Choose a Pressure Sandblaster System?